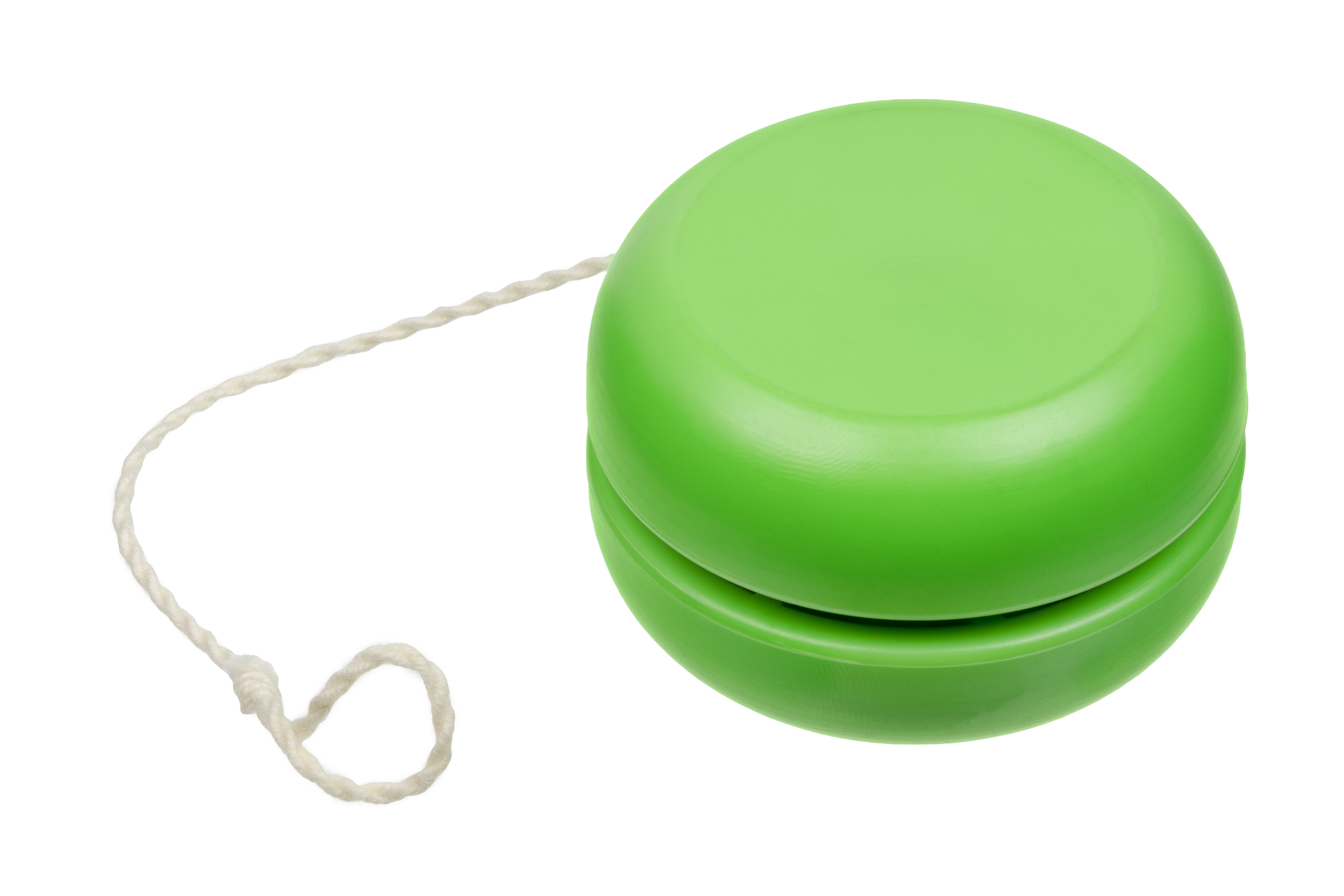 A yo-yo (also spelled as yoyo) is a toy consisting of an axle connected to two disks, and a string looped around the axle. It has some similarities to a slender spool.

A yo-yo is played by holding the free end of the string known as 4 the handle (by inserting one finger—usually the middle or index finger—into a slip knot) allowing gravity (or the force of a throw and gravity) to spin the yo-yo and unwind the string (similar to how a pullstring works). The player then allows the yo-yo to wind itself back to the player’s hand, exploiting its spin (and the associated rotational energy). This is often called “yo-yoing”.

The word yoyo probably comes from the Ilocano term yoyo, or a cognate word from the Philippines.

A Greek vase painting from 440 BC shows a boy playing with a yo-yo (see right). Greek records from the period describe toys made out of wood, metal, or painted terra cotta (fired clay). The terra cotta disks were used to ceremonially offer the toys of youth to certain gods when a child came of age—discs of other materials were used for actual play.

In 1928, Pedro Flores, a Filipino immigrant to the United States, opened the Yo-yo Manufacturing Company in Santa Barbara, California. The business started with a dozen handmade toys; by November 1929, Flores was operating two additional factories in Los Angeles and Hollywood, which all together employed 600 workers and produced 300,000 units daily.

The principal distinction between the Filipino design popularized by Flores and more primitive yo-yos is in the way the yo-yo is strung. In older (and some remaining inexpensive) yo-yo designs, the string is tied to the axle using a knot. With this technique, the yo-yo just goes back-and-forth; it returns easily, but it is impossible to make it sleep. In Flores’s design, one continuous piece of string, double the desired length, is twisted around something to produce a loop at one end which is fitted around the axle. Also termed a looped slip-string, this seemingly minor modification allows for a far greater variety and sophistication of motion, thanks to increased stability and suspension of movement during free spin.

Shortly thereafter (c. 1929), an entrepreneur named Donald F. Duncan recognized the potential of this new fad and purchased the Flores yo-yo Corporation and all its assets, including the Flores name, which was transferred to the new company in 1932.

The name “Yo-yo” was registered in 1932 as a trademark by Sam Dubiner [he] in Vancouver, Canada, and Harvey Lowe won the first World Yo-Yo Contest in London, England. In 1932, Swedish Kalmartrissan yo-yos started to be manufactured as well.

In 1933 yo-yos were banned in Syria, because many locals superstitiously blamed the use of them for a severe drought.

In 1946, the Duncan Toys Company opened a yo-yo factory in Luck, Wisconsin. The Duncan yo-yo was inducted into the National Toy Hall of Fame at The Strong in Rochester, New York, in 1999.

Declining sales after the Second World War prompted Duncan to launch a comeback campaign for his trademarked “Yo-Yo” in 1962 with a series of television advertisements.

In a trademark case in 1965, a federal court’s appeals ruled in favor of the Royal Tops Company, determining that yo-yo had become a part of common speech and that Duncan no longer had exclusive rights to the term. As a result of the expenses incurred by this legal battle as well as other financial pressures, the Duncan family sold the company name and associated trademarks in 1968 to Flambeau, Inc, which had manufactured Duncan’s plastic models since 1955.[citation needed] As of 2014[update], Flambeau Plastics continued to run the company.

As popularity spread through the 1970s and 1980s, there were a number of innovations in yo-yo technology, primarily regarding the connection between the string and the axle. In 1979, dentist and yo-yo celebrity Tom Kuhn patented the “No Jive 3-in-1” yo-yo, creating the world’s first “take-apart” yo-yo, which enabled yo-yo players to change the axle.

Swedish bearing company SKF briefly manufactured novelty yo-yos with ball bearings in 1984. In 1990, Kuhn introduced the SB-2 yo-yo that had an aluminum transaxle, making it the first successful ball-bearing yo-yo.

In all transaxle yo-yos, ball bearings significantly reduce friction when the yo-yo is spinning, enabling longer and more complex tricks. Subsequent yo-yoers used this ability to their advantage, creating new tricks that had not been possible with fixed-axle designs.

There are many new types of ball bearings in the market which deviate from the original design and/or material of the standard stainless steel ball bearing. For example, a certain type of bearing has an inward facing curved surface, to prevent the string from rubbing on the sides of the yo-yo, which would cause unwanted friction when performing intricate string tricks. Other manufacturers replicate this with a similar inwardly curved surface, but use minor modifications. Some high-end bearings use ceramic composites in the balls of the bearing, to reduce internal friction, again making for a smoother spinning yo-yo. Precious materials such as ruby have also been used as a material in prototype ball bearings for its properties such as extreme hardness. The material was first tested in a prototype bearing made by Wolf Yoyo Works in May 2018.

The sleeper is one of the most common yo-yo throws and is the basis for nearly all yo-yo throws other than looping. Keeping a yo-yo spinning while remaining at the end of its uncoiled string is known as sleeping. While the yo-yo is in the “sleeping” state at the end of the string, one can then execute tricks like “walk the dog”, “around the world”, or the more complex “rock the baby”.

The essence of the throw is that one throws the yo-yo with a very pronounced wrist action so that when the yo-yo reaches the end of the string it spins in place rather than rolling back up the string to the thrower’s hand. Most modern yo-yos have a transaxle or ball bearing to assist this, but if it is a fixed axle yo-yo, the tension must be loose enough to allow this. The two main ways to do this are (1), allow the yo-yo to sit at the bottom of the string to unwind, or (2) perform lariat or UFO to loosen the tension. When one decides to end the “sleeping” state, one merely jerks the wrist and the yo-yo “catches” the string and rolls back up to the hand. Ball-bearing yo-yos with a “butterfly” shape, primarily used for string tricks, frequently have low response or are completely unresponsive, requiring a “bind” for the yo-yo to return.

In competition, mastery of sleeping is the basis for the 1A division. Inexpensive fixed-axle yo-yos usually spin between 10-20 seconds, while the expensive ball bearing yo-yos can spin about 1-4 minutes depending on the throw. As of 2010[update], the world record sleep times were 3:51.54 minutes for fixed-axle and 21:15.17 minutes for transaxle yo-yos. In 2012, the transaxle yo-yo sleep time record was broken by the C3YoyoDesign BTH, with a time of 30:28.30 minutes.

Looping is a yo-yo technique which emphasizes keeping the body of two yo-yos, one on each hand, in constant motion, without sleeping.

Yo-yos optimized for looping have weight concentrated in their centers so they may easily rotate about the string’s axis without their mass contributing to resistance due to a gyroscopic effect. also, known as 2A or two hands looping freestyle.

In yo-yo competitions, looping both to the inside and outside of the hand with the yo-yo plays a strong role in the 2A division.

Two handed or 3A style play involves doing string tricks with two flared bearing yo-yos. Popularized and pioneered by Mark McBride, the first modern Triple A trick appeared in Fiend Magazine and was called the Velvet Rolls. The different mounts in this style are referred to as houses (e.g. “Kink House”).

Photos from as early as the late 1950s show early yo-yo demonstrators performing very basic Triple A tricks, such as a Sleeper with one hand, and a Trapeze with the other. While Triple A as a concept has existed for many years, it was not until the debut of Velvet Rolls, coupled with the rise of unresponsive yoyo play, that development began on what is currently considered Triple A.

In competition, two handed string tricks have the 3A division.

Yo-yos optimized for off-string tricks have flared designs, like the butterfly shape, which makes it easier to land on the string, and often have soft rubber rings on the edges, so minimum damage is inflicted on the yo-yo, the player, or anyone who happens to be standing nearby, should a trick go wrong. There are also tricks which involve the use of two off-string yoyos at the same time, thrown with the same hand, this is known as “soloham.”

Yo-yo competitions have the 4A division for off-string tricks.

In freehand tricks, the yo-yo’s string is not tied to the player’s hand, instead ending in a counterweight. The counterweight is then thrown from hand to hand and used as an additional element in the trick.

Developed in 1999 by Steve Brown, as of 2008 freehand is considered to be the fastest-growing style of yo-yo play. Steve Brown was awarded a patent on his freehand yo-yo system, which was assigned to Flambeau Products (Duncan’s parent company).

In yo-yo competitions, counterweight yo-yos are emphasized in the 5A division.

Patents have been issued to create more complicated mechanisms to allow tension control and an adjustable mechanism.