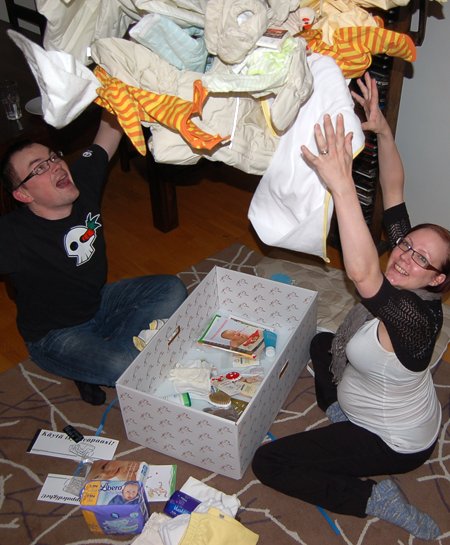 The Maternity package (Finnish: aitiyspakkaus, Swedish: moderskapsforpackning) is a kit granted by the Finnish social security institution Kela, to all expectant or adoptive parents who live in Finland or are covered by the Finnish social security system. The package contains children’s clothes and other necessary items, such as nappies, bedding, cloth, gauze towels and child-care products. It was first issued in 1938 to parents with a low income, and contained a blanket, crib sheets, diapers, and fabric which parents could use to make clothing for the baby.

Since 1949 it has been given to all mothers-to-be, provided they visited a doctor or municipal pre-natal clinic before the end of their fourth month of pregnancy, and the pregnancy has lasted at least 154 days. The contents of the package are updated approximately every year.

Following a BBC story in June 2013, the baby box began to receive international attention. Similar packages, commercial or state-sponsored, are being trialled around the world. Private companies have started selling packages purporting to be the “Finnish baby box” or similar to it, but the original boxes are not sold commercially.

In 1949, the box given was standard to all expectant mothers who visited a doctor before the fourth month of pregnancy per the

Finnish Maternity Grants Act. A baby bottle was added to the package, but was removed in later packages to encourage breastfeeding. The requirement to visit a doctor as a prerequisite to receiving the package was done in order ensure that the woman received adequate prenatal care.

The box containing the package transforms into a crib in which many newborns have their first naps. A mother may choose to take the maternity package, or a cash grant of 140 euros, but 95% of Finnish mothers choose the box because it’s worth significantly more. The maternity package can either be applied for online, on Kela’s website, or by completing and returning a form.

The current package contents include bodysuits, a sleeping bag, outdoor gear, bathing products for the baby, nappies and cream, bedding and a small mattress (allowing the box to be used as a crib), a hooded bath towel, nail scissors, hairbrush, toothbrush, wash cloth, muslin squares, a picture book, teething toy, bra pads, and condoms. Condoms are included by way of precaution, not as a discouragement, as a new pregnancy is possible within a few weeks of childbirth and many parents wish to have a little time between the births of their children.

The maternity package is not a commercial product, and therefore Kela cannot sell it. Prince William and Catherine, Duchess of Cambridge received a maternity package as a gift from Kela in 2013. Crown Princess Victoria and Prince Daniel of Sweden were given one in 2012.

In 2017 the box contained following items:

There is no evidence that the baby box has lowered infant mortality in Finland. However, there is great promise for the baby box’s potential in public health, with reports soon forthcoming on this topic from Finnish research groups. The program is now considered a part of the culture of Finland.

As of June 2019, there had been one experimental study conducted on the use of baby boxes (a.k.a., “cardboard bassinets”), in combination with safe sleep education, for reducing bed-sharing, which is a risk factor for sudden infant death syndrome (SIDS) and sleep-related deaths (SRD). Researchers at Temple University Hospital assigned study participants (i.e., mother-infant dyads) to one of the following conditions for postpartum hospital discharge: standard hospital discharge instructions; standard instructions plus additional safe infant sleep education based on the AAP safe infant sleep recommendations; or both types of instruction plus a gifted baby box from The Baby Box Company. The researchers concluded that the third condition (i.e., both types of instruction plus a gifted baby box) reduced the rate of bed-sharing during the first week of the infant’s life (as self-reported by the participating mothers), particularly for exclusively breasfeeding mother-infant dyads.

In July 2015, Argentina’s Ministry of Health under then-president Cristina Fernandez de Kirchner introduced “Plan Qunita” which distributes maternity packages to parents of newborn babies. At the rollout of the program, about 144,000 Qunitas were issued.

In Australia, the state of New South Wales began a program providing a baby bundle to the parents of every baby born from 1 January 2019. The bundle contains picture books, mats, a first aid kit, a sleeping bag, thermometers, and consumable child-care products such as cloths and wipes, with a total retail value of AU$300.

Similarly, the state of Victoria began a baby bundle program starting from July 2019, for all first-time parents and carers.

Scottish National Party leader Nicola Sturgeon pledged to implement a similar scheme in Scotland in her party’s manifesto for the 2016 election, which saw the SNP returned as a minority government. After a three-month pilot scheme in Clackmannanshire and Orkney, the Scottish “baby box” began to be issued to all parents with newborns in summer 2017, with over 52,000 such boxes issued in the first twelve months of the programme.

In the summer of 2017, it was announced that the U.S. state of New Jersey would become the first state in the country to adopt the baby box program.